Off to Hollywood Studios again today (our second but final visit there this trip). To read the previous blog entry you can find that here. Walking in from the parking area the sky was amazing and the row of palm trees looked fantastic.

We decided to watch the Frozen Royal Welcome again and I think I got some better pictures this time around. We were in almost the same spot again.

After the parade we used our first FastPass for the Little Mermaid show.

We didn’t really need the FastPass for this ride (and maybe should have used it to go on the Buzz Lightyear ride again) but we were straight in and seated for the live show.

After that we used our second FastPass for the Indiana Jones Stunt Show.

The first act was great but as the second act started they announced they were going to move quickly due to a storm coming in and reports of lightning in the vicinity.

Unfortunately the storm was heading right for us so the third act was called off and we didn’t get to see that.  So the show ended at the end of the second act with the rain once again tipping down outside the arena.

Every time we come to Hollywood Studios it seems to absolutely pour with rain!

It was heading for lunchtime anyway so we took shelter at the Studio Catering Company for some food.  Rosemary tried the Smuckers Crustless PB&J Sandwich which went down well. The humidity level at this point was horrendous, probably the highest during the whole trip.

Spotted a ton of bricks dangling precariously nearby.

There is the fantastically named “Youse Guys Moychindice”.

Weather was really improving by this point and we stopped for ice creams at Gertie’s Ices.

Olaf’s Summer Cool Down show was going to be starting so we headed to the stage area (now without the Mickey Sorcerer Hat which was the icon for the park) for the show.  Lots of singing and dancing.

Afterwards we went and had a rest for a little bit and then we could hear music, so went to find out what was going on. Which was a street party with the characters dancing about.  We joined in (a bit anyway) with Daisy Duck.

I can’t honestly recall where we eat dinner that day, but after that we went to the Beauty and the Beast show.  We were a bit late getting there so we were a long way back, so didn’t get the best pictures.

Unfortunately around this time Julia managed to get stung by a bee and was in some really nasty discomfort from it.  So we headed to the first aid by the park entrance.  They got the sting out, patched her up and gave her an ice pack to reduce the swelling.  Poor Rosemary was so worried!

Our final event of the day that we had planned was for Fantasmic, which we had never seen before, so really looking forward to.  The arena it takes place in is huge (I had no idea how big it was until we got in there) and was pretty much full. Being a way back and having to zoom to get anything worth capturing meant the photos were really poor though, so rather than worry I just watched the show and just got a few when things were a bit brighter.

So that was the end of the day and we headed towards the exit of the park via the back way out of the arena.  But as we were leaving the Frozen fireworks show was underway, so we stopped at the park entrance to watch it.

A nice way to end the day and our visits to Hollywood Studios.

I didn’t shoot much variety of video this day (few pieces which are quite long of the parade, stunt show and Olaf’s Summer Cool Down) but what I did is on YouTube and can be found through the link below.

Off to Disney’s Hollywood Studios this morning.  The weather forecast wasn’t looking too good for the afternoon so we weren’t planning on staying too long.  But we had FastPasses booked and also a lunch reservation, so off we went.

On arrival there was a massive Frozen sand sculpture which sets the theme that there is going to be a lot of Frozen stuff in the park.

First stop of the morning was to watch the Frozen Royal Welcome Parade (yes, Frozen again).  We really lucked out and got a bench with the Indiana Jones Stunt Show behind us and just opposite the ABC Sound Studio.  Meant we could sit down and wait for the parade to come along.  As we had a little time before that happened I took Rosemary off to watch the Jedi Training, which was on, while Julia waited at the bench.

The Padawan’s were just fighting Darth to gain their Jedi status.

After Darth went the Stormtroopers were left behind and provided some good comedy.

Looked like lots of fun and would probably sign Rosemary up next visit.  Took a picture with the AT-AT which sits over the Star Tours entrance.

At this time the parade was starting and we nipped back.  First off Anna cam out followed by some dancers.

There was even some snow (or at least some foam).

The parade also included Olaf, Kristoff and of course Elsa.

After the parade we used our first FastPass for the Frozen Sing-A-Long.  This features two narrators who whisk through the story of Frozen. They spent a while at the start of the story and then whizzed through the end of it.  Good show though, although even with our FastPasses we were a long way back and not sure it gave us any advantage at all.  Everyone is let into an ante-room and then there is a mad race to get into the theatre.  Would have been nice if the FastPass got you into the theatre rather than just the ante-room so you could get closer to the front.

When the show finished we were close to our lunch reservation time and headed off to the Sci-Fi Drive-In Diner.  This is a large mocked up Drive-In Cinema where the cars are really tables and you have lunch while there are 1950’s sci-fi movie clips playing.  Was a good novelty.  Rosemary wasn’t that bothered by it but the food was actually pretty good.

Only complaint I would have is that we were there an hour and the movie reel started again in that time.  I would have thought it could go a little longer than that to be honest as no-one is likely to be in an out that quickly.

When we came out the weather was turning a bit and it was starting to rain.  Our next FastPass was for the Toy Story Midway Mania ride.  We’d tried to get onto this before but never managed it because the stand-by time is usually around 90 minutes.  Armed with FastPasses we were straight in this time.

Lots of fun.  I went with Rosemary and Julia went behind us on her own.  Think she won and got the most points.

The weather was definitely on the turn so we decided to us up our last FastPass and actually managed to bring it forwards through the iPhone app.  So we joined to queue for Star Tours.

You can see the rain running off the AT-AT.

FastPasses really pay off on this one as well getting you through the queue way quicker.  Only disadvantage is you whizz through the queue area and miss a lot of the interactive stuff like C3P0 and R2D2 prepping the ride.

You do get very cool 3D glasses for this ride though.

With a break in the weather we called it a day and decided to head back to the car.  We had just cleared the park entrance when the heavens opened and decided to empty themselves onto us.  We were absolutely drenched by the time we got back to the car.  I threw my poncho over the buggy to try and keep that and Rosemary dry, which more or less worked, but did result in getting very wet but the clothes would dry off and we were finished for the day anyway. 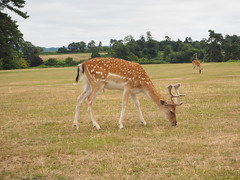 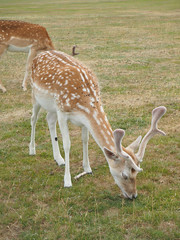 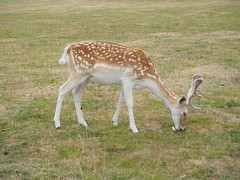 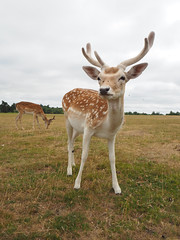 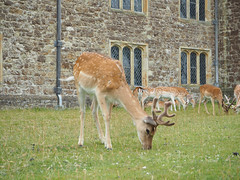 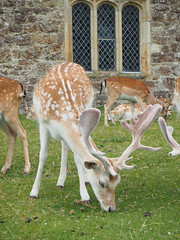 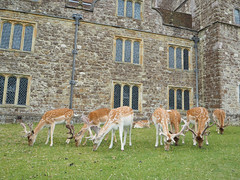 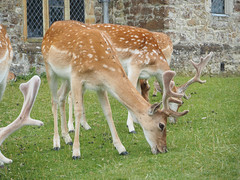 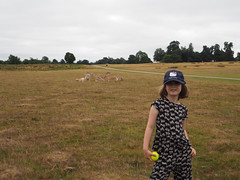 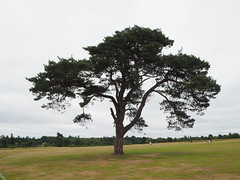